A Great Night And A Great Dining Experience 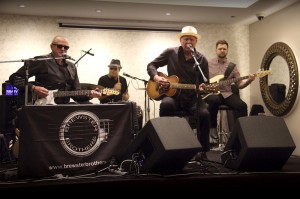 Last Friday night was a success as “Gemelle Ristorante Italiano” in Liverpool played host to their very first ever evening of live music.

Much like the songs played by the Brewster Brothers, the cuisine at this new location represents a journey through quality and variety across to the top end of town.

Enjoyed by yet another full house the lively performance was a big hit with everyone in the room!

Ranging from John’s solo delivery of a classic early Bob Dylan number right through to some of the pair’s own very blues based originals the evening saw even some of the finest diners slip off their shoes and join the dancing throng at the front of the stage. 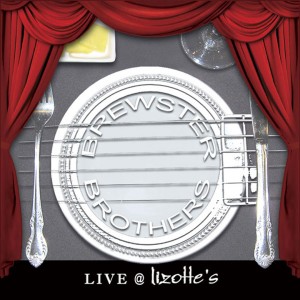 Well respected musical siblings John & Rick Brewster are very proud to announce the arrival of their latest album performing as the Brewster Brothers.

Titled “Live @ Lizotte’s” this new release of over a dozen tracks was recorded at shows across three nights during the Autumn of 2012.

Emblematic of their inate ability to engage music lovers from all walks of life, the result clearly displays an ever present set of skills that the pair continue to command as they entertain inside the new raft of fine dining venues which have been opened across the country during the course of the last decade.

Although the Brewster Brothers are able to, and often do, perform their music simply as two players on the stage they have lately almost always presented their stories and songs as a four piece electro-acoustic outfit. Despite offering up some tracks which are solo and duo presentations “Live @ Lizotte’s” mostly sets the tone by using that same four piece approach as its mainstay.

Whilst there has been a fleet of musicians who have enjoyed taking the stage with Rick & John over the years it is most probable that these days you will find them in the company of the two players who make up the band heard on this new album.

Long time family friend Nick Norton is recognised by many as a multi-talented performer and on this album not only provides the drumming but he also manages to peel off a very interesting acoustic guitar solo and provide a whole slab of backing vocals. Sam Brewster, who is a next generation representative of the family, rounds out the line up by keeping a keen connection between the rhythm and the melody as he lays down the bass guitar parts across all the songs.

“We’re wrapped in this album”, remarks John Brewster – “…it represents a great cross section of my love of Bob Dylan’s music, Rick’s early years learning traditional keyboards, our union as songwriters and of course our long time experience in The Angels. Even my son Tom has made a guest appearance on the drums in the track Devil’s Gate, and during the entire time we made the record we were surrounded by a whole host of people we love and respect….it really shows in the end result.”

There are some excerpts of the recorded tracks from “Live@Lizotte’s” available to hear on the “Music Page” of this web site.

You can also Click Here to visit the album’s own special web page where you can find a free download of all the lyrics to help you sing along. 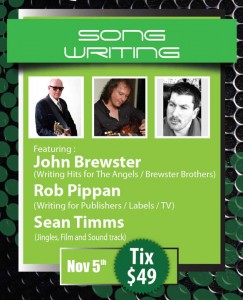 Considering John Brewster’s career path & his induction into the ARIA Hall Of Fame it’s little wonder that ETI Music have now requested his participation in the first of their three “Inside The Music” masterclass presentations for the summer of 2013.

By special arrangement John will be freely offering to share his vast knowledge on the art of song writing alongside label writer Rob Pippin and film writer Sean Timms.

By carefully matching presentations from this trio, the 3 hour opportunity on November 5th will offer participants a very balanced insight into the multiple situations in which a writer may find their works.

You can Click Here to view ticketing details for this rare & special event. 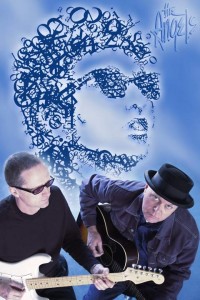 Despite still completing their tour with The Angels for the “Take It To The Streets“ album, John and Rick are now set to embark on a run of special Brewster Brothers shows which will see them performing around the traps right through to the Christmas season.

Beginning at the friendly Courthouse Hotel in Mullumbimby on Sunday 25th August is a return by popular demand of the Blowin’ In The Wind performances.

These shows start out with an entire set of songs by John’s childhood music hero Bob Dylan and then, after a brief interval, the band will return to the stage to perform a second set made up of beautiful tunes from the history of the Brewster’s own writings along with a good supply of rocking numbers drawn from the famous back catalogue of legendary Angels hits.

After the success of these shows in 2012 it’s no wonder the brothers have been petitioned to bring this show back to a very special set of select venues in 2013.

Considering the depth of the material it’s really like getting three shows for the price of one ticket. You can get more information on tickets for this show by clicking this link.