Special Live Show – Back To Where It All Began –

Coming up on Fri 2nd October the Moonshine Jug & String Band will be inducted into the Hall Of Fame at the Goodwood Institute as part of the Adelaide Music Collective sessions.

The evening will also see a special posthumous induction into The Hall Of Fame for Chris Bailey as well as a fitting tribute being paid to Doc “Bernard” Neeson. 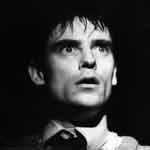 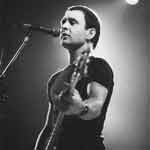 Whilst this will be an intimate affair there are some tickets available on line. The show will present Gill Hicks & Gary Burrows (with the Immanuel College Choir), Sasha March, Banjo Jackson and then culminate with a live reformation performance presented by The Moonshine Jug & String Band.

The Goodwood Institute holds a special place in the history of the Adelaide music scene having been the home of The Oxford Club from the late 60’s into the early 70’s. The venue was to play host to many burgeoning young artists including those who were set to move through their role in The Keystone Angels before finally becoming the Australian music icons simply known as The Angels. 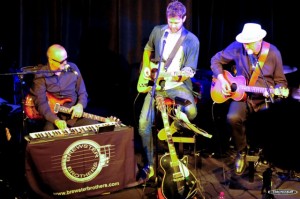 The new theatre show telling the story behind The Angels, and more, is beginning to move around the country with tickets selling out well before each show arrives.

Aptly titled Brothers, Angels & Demons these shows delve right back to the beginnings of The Moonshine Jug’n’String Band with original members and old cohorts often taking to the stage alongside the all-Brewster cast for a very memorable evening.

The recent performance at The Promethean in Adelaide saw legendary radio announcer David Day come along to fill the role of narrator as the unqiue interactive script captures answers from John & Rick Brewster about the musical heritage of their family, the ‘early days‘ in their home-town and of course the many stories behind the bands that led on to the formation of The Angels.

Original string band member Spencer Tregolan wove his way through the audience with his banjo in hand to add that extra layer of originality to the zany jug band songs which find their way into each and every performance.

There are more shots of the evening on our Photos Page, and keep an eye on this site as more dates come to hand for Brothers, Angels & Demons. 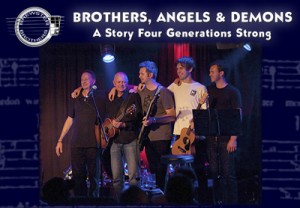 After receiving standing ovations in Melbourne and Sydney last month John and Rick Brewster will be bringing their new Brothers, Angels & Demons show into Adelaide on Fri 30th January 2015.

Fans will be given a rare glimpse behind the scenes from the story of The Angels. Presented by two of the key players the show offers a multmedia experience describing one of Australia’s most enduring rock outfits.

Click Here to visit the Shows Page for ticketing information on this rare event. 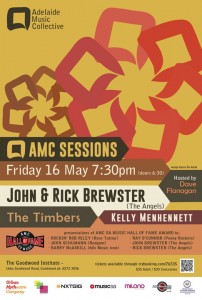 On Friday 16th May, in Adelaide, brothers Rick & John Brewster will be performing at the AMC Sessions on a bill hosted by Dave Flanagan and supported by music artists The Timbers and Kelly Menhennet.

As well as performing live at this very special event, the evening will see Rick & John Brewster inducted into the AMC SA Music Hall Of Fame alongside Rob Riley, Ray O’Connor, John Schumann and Barry McAskill.

The show will be held inside the old Goodwood Institute building which during the 1960’s played host to live entertainment from Mod bands, Beat Music and Rock ‘n’ Roll acts at a time when the venue was known as The Oxford Club.

The public are welcome to attend this special evening. Ticketing information can be found on the Gigs Page of our site but due to the anticipated demand it’ll surely be a case of “first in – first served“.